An Octogenarian with a Challenge 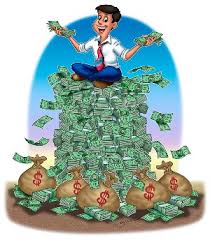 IS THIS THE WAY IT SHOULD BE?

An 84 year old woman of Zephyrhills, Fla. has a blessing and a challenge.   She recently won the $590 million powerball bonanza.  She chose to receive  nearly $371 million in a lump sum payment. That is her blessing and because of  her age it seemed to be the right decision,  but how to distribute it must be a challenge. The federal government will require that she pay a 25% tax of the  amount she received, so the difficult challenge will be lessened by that much. She showed  octogenarian-like wisdom by involving a son, a lawyer, and a financial advisor  in making decisions about how to conserve and wisely distribute the money.

Yet the Old Fool questions the wisdom of the whole process.  Where did  the original $590 million come from?  It seems to the Old Fool that there  must have been millions of greedy and  foolishly hopeful purchasers of  tickets who vied for a chance to win. Their greed and foolishness contributed  to the millions received by the one who won.

It seems strange to the Old Fool that millions resent the taxes they pay to the government,  yet they are  enticed to pay a “voluntary tax” in a lottery motivated by the unlikely  possibility that they will win a power-ball bonanza. That “lucky” winner alone  controls the distribution of millions of dollars.  Should it be that  way?  Would it not be wiser to gladly pay taxes to a government that would wisely and generously distribute it?

The hungry need to be fed; the homeless housed; the infirm given medical  attention.  Infrastructure needs to be repaired; the ravages of war  overcome.  The alien should be treated fairly.  So should all people have what they need wherever they are, whatever their color and tongue, at whatever  cost.  When we all pull together it can be done. No one needs to be poor  and no one must be rich among us.  It will take time, but the whole earth  will receive a bonanza when there is peace because good will abides.  No  octogenarian deserves more than she needs; no infant deserves less.

So says the Old Fool!

I was born 92 years ago, the son of a Mennonite pastor and organic gardener in Franklin County, Pennsylvania. At age 10 I was baptized as a member of the Marion Mennonite Church. I own the "Old Fool" moniker because I want to walk the Jesus Way even though the world and much of the church takes me as a fool for doing so. In my life I have moved from being a young conservative to an elderly radical. I tell that story in My Faith Journey posted on my website.
View all posts by Martin Lehman →
This entry was posted in Faith, Politics, Uncategorized. Bookmark the permalink.

1 Response to An Octogenarian with a Challenge