The joys of the day mounted as the hours passed, a harbinger of things to come.

Rachel and I arrived at the Berea Mennonite Church a bit late  for the lectionary period which was scheduled for ten o’clock.  There were four people including  the pastor who was being briefed  about community events while he was gone on family vacation.  we were warmly welcomed. One of people present remembered me. We were offered doughnuts and coffee.

We were soon talking about the past.  I listened eagerly as Berea’s present pastor talked about his contact with the Macon Gwinn’s  family and his church. He reported that members of Macon’s church said that their church is unlike other Baptist churches.  It was more of a peace church than most Baptist churches. As I listened it seemed that some years ago the Mennonite Church lost Macon, but his ministry seems to have taken  a new note, an Anabaptist note, where ever he went.

Another person joined the lectionary group. Her name was Joy Hostetler and we remembered each other from a time when  we were both much younger.  She was a member of churches in Pinellas County, Florida. At the end of the service she confronted me for referring to myself as a fool.  You are no fool she said. She reminded me that after observing her work as a camp counselor at Lakewood Retreat that I told her she had many gifts. She said that I was the first person to notice her and to tell her that she was gifted.  This was an important moment for her. 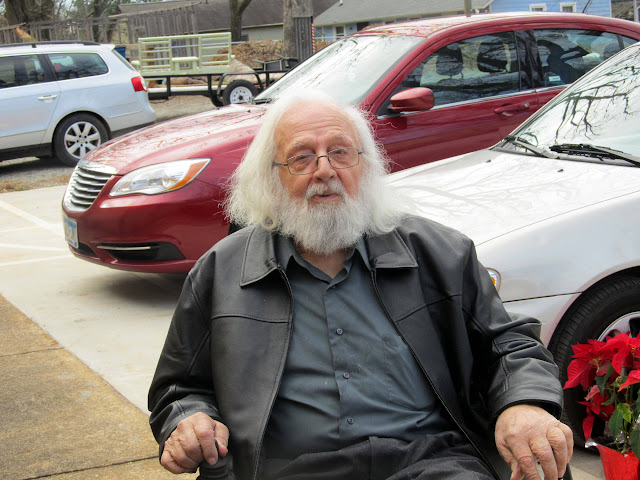 twenty more persons came for the worship service.  The group was composed of all ages ranging  from children, young adults, middle aged, and seniors.  Among them was a patriarch named Vernon.  It was my memory of him that brought about the “old fool” reference.  Vernon was out an out spoken advocate for churches who dared to welcome all believers regardless of their sexual orientation.  Once when he was speaking I over heard someone whisper, “I wish Vernon would keep quiet.”  Remembering that, I told the story and honored him as an old fool like me.

This was the first time  for me to meet John Wierville, the pastor of Berea. He was raised by Catholics, went to law school and seminary, became a UCC pastor, and is now a convinced Anabaptist and pastor. His sermon was  outstanding and well suited for Epiphany Sunday.  He drew on his  Catholic background,  biblical learning and personal vision to challenge us to be a light for Christ in the world.  At one point he gave each adult a box of safety matches. He asked us to strike a match and as it burned to pray, asking that we may recognize the times we can light candles. The service ended with communion.

After the  service the pastor’s young daughter gave us a quick tour of Oak Leaf Mennonite Farm.  One time as Pastor John Wierville was mowing the three acre lawn he got the vision of doing more with that land.  It is now  a long cooperative organic urban farm in Atlanta.   It is a story of faith and mission of its own. I wanted to help the pastor feed the chickens, but Rachel felt that the walk was too long for me and said that if Wierville and I got to talking the chickens might not get fed. How well she knows preachers! To cap our experience with Mennonites in Atlanta, about half of the congregation went to a nearby restaurant for taco salads.

Included in the experiences of the day was  James Rissler, pastor of the Atlanta Mennonite Fellowship that meets on Sunday evenings in a Friends Meeting House.  Around the lunch table I asked the two pastors if there was anything that disturbed the relationship of their two congregations. They laughed happily and said “that is all in the past.” They now have the same theological views and missional vision. The gifts of these young pastors  should be recognized by the church as a whole. Rachel called Berea a seed bed.

She observed that the group was small, yet the caring, energy, and relationships with many people beyond today’s group was obvious.  In no way was there any hint of a pity party about their size or isolation, or struggle,

She described pastor John Wierwille as the tiller of the soil of this seedbed. When his mother married a United Church of Christ man, young John added this  to his set of influences and finally became strongly Anabaptist and Mennonite.  He takes his role as leader of the church to heart in amazing ways.  He is the lead farmer and envisions it as a meaninful neighborhood ministry. He highly values those who have long histories at Berea and he befriends and mentors the young adult college and seminary students who come to Berea.

I was born 92 years ago, the son of a Mennonite pastor and organic gardener in Franklin County, Pennsylvania. At age 10 I was baptized as a member of the Marion Mennonite Church. I own the "Old Fool" moniker because I want to walk the Jesus Way even though the world and much of the church takes me as a fool for doing so. In my life I have moved from being a young conservative to an elderly radical. I tell that story in My Faith Journey posted on my website.
View all posts by Martin Lehman →
This entry was posted in Church, Uncategorized. Bookmark the permalink.