Some thoughts after Rehab 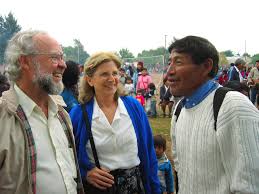 I could have left Greencroft’s Rehab on Friday afternoon, but the memorial service of missionary Willis Horst delayed my departure for a day.  My daughter Rachel belonged   at the memorial service because of connections within Mennonite Mission Network, and son-in-law Eldon belonged at the service because of relationships as a hospice chaplain. So I gratefully accepted the extra free day offered patients leaving Greencroft.

The more I learn of Willis Horst as a missionary the happier I am that Eldon and Rachel could honor him and his family by their presence at the memorial service.  Missionaries are sometimes accused of destroying the cultures of indigenous peoples.  Horst offered a different missionary style.

Willis graduated from Goshen College before teaching on the Navajo eservation in New Mexico and Arizona.  After further study at the Anabaptist Mennonite Biblical Seminary,  he served for almost 40 years with the Mennonite Mission Network and the indigenous churches in the Chaco region of Norhern Argentina.

In the Chaco, Willis developed what is called the Bible Circle, a conversational format that encourages people to explore their spirituality and the values of Jesus within their own culture.   In this format the missionary understands himself to be an invited guest who listens, discerns and shares as an equal rather than imposing his own views.

While I was a patient at Greencroft, a Baptist Church youth group came to us with a special service, and I attended it.  The pastor’s sermon was based on truths found in the beginning of Proverbs 15 which begins with the verse: A soft answer turneth away wrath: but grievous words stir up anger.

If I were a betting man I would be willing to wager that the sentiments of Proverbs 15 could be found in the sacred writings of every religion.  So after the sermon I went to the pastor and complimented him for his sermon. And I added, I believe the truth about a soft answer turning away wrath is true in all human relations, personal relationships and relationships between parties and nations.  He answered, I believe that, too. I believe it with all my heart.

Walking from the Pulpit

Perhaps what the world needs is for all of its “holy” men to walk from behind their pulpits and lay their sacred books on the table for all the world to examine the areas of agreement within them.  Agreement, not because they are sacred, but sacred because of the common sense found within them.  Proverbs is a book of common sense.

I was born 92 years ago, the son of a Mennonite pastor and organic gardener in Franklin County, Pennsylvania. At age 10 I was baptized as a member of the Marion Mennonite Church. I own the "Old Fool" moniker because I want to walk the Jesus Way even though the world and much of the church takes me as a fool for doing so. In my life I have moved from being a young conservative to an elderly radical. I tell that story in My Faith Journey posted on my website.
View all posts by Martin Lehman →
This entry was posted in Biblical Interpretation, Uncategorized. Bookmark the permalink.

1 Response to Some thoughts after Rehab