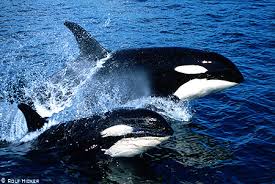 Frederick Buechner carefully divided his book on the longing for home into two major sections.  The first section is filled with reflections on his first home.  He believes that the home for which we long is somewhat like our first home.   I am reading at the dividing point.

In the first paragraphs of the second section Buechner tells of a family visit to Sea World at Orlando, Florida.  I know the scene: tourists seated on bleachers around a large tank filled with clear water; a platform stretching out over the water with handsome young men and beautiful young women who controlled the show, clad in swim suits that  displayed strong and shapely bodies.

On cue, five or six killer whales entered the tank and swam round and round in what  Buechner saw as a dance.  To him the graceful whales were a harbinger of the time when all creation will dance joyfully in the kingdom to come, when all is as it was meant to be from the beginning.   Buechner reported that his eyes clouded with tears of joy.

Yesterday, My Joy and I went to Mishawaka to see “12 Years a Slave”, a movie portraying the true life story of Solomon Northup, an African American living in upper New York State.  He was kidnapped and sold into slavery until he was rescued after 12 years.   At the end of the movie my tears were of a different kind. 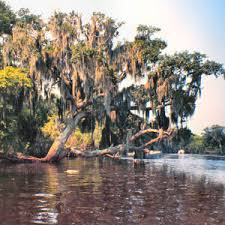 The scenery of the movie reminded me of the southern states with their mammoth live oaks covered with silvery Spanish moss. I sobbed because the movie showed what sometimes went on beneath the oaks.  White men and women considered black people no better than so much property. They bought and sold them, worked them, beat them and lynched them at will.

I had lived for 57 years in the deep south, and the white and black people who were the descendants of the people in the film,  I  respected, served and loved.  The churches I worked with helped blacks and whites to eat together,  go to church and to youth camps together.

The older whites were known as crackers. Wikipedia suggests that they were given the nickname because of the way their ancestors drove cattle by cracking their whips over them.  According to the movie, whips were also cracked over slaves picking cotton. And they were flogged with whips for some perceived wrong doing. (See movie trailer.)

Buechner’s eyes clouded with tears because the joyful dance of the whales held hope for the future.  I sobbed for the way present day political posturing and society has been shaped by the sins of the past and defended by a misreading of the Bible.

I was born 92 years ago, the son of a Mennonite pastor and organic gardener in Franklin County, Pennsylvania. At age 10 I was baptized as a member of the Marion Mennonite Church. I own the "Old Fool" moniker because I want to walk the Jesus Way even though the world and much of the church takes me as a fool for doing so. In my life I have moved from being a young conservative to an elderly radical. I tell that story in My Faith Journey posted on my website.
View all posts by Martin Lehman →
This entry was posted in Politics, Uncategorized. Bookmark the permalink.