The Beginning and the End

I am sometimes fascinated by the intersection between poet, dreamer, and scientist.  The scientist sometimes follows an imaginative path into the future set by science fiction. Martin Luther King climaxed his famous speech with the words, “I have a dream.”  He and Harry Belafonte were friends.

On my last Sunday at Greencroft I asked a friend to take me to the New Perspectives on Faith lecture. I felt strong enough to check myself out of Greencroft with the nurse’s knowledge.  The lecture  was given by one of the more famous sons of the Goshen community. He is a scientist associated with NASA who helped develop the  Hubble telescope and is now working on its powerful successor.  His lecture was titled, “The beginning and the end of the universe”.  Being an amature  theologian I was curious about what a scientist had to say on the beginning and the end of the universe.

Being a good scientist, he followed the evidence to the beginning, but the nearer he got to the beginning the more I thought I heard cautioning  caveats about the certainty of his findings.  The evidence allowed him to project into the future.  But again there were those troublesome caveats.  I am not the scientist that he is.  I respect his ability to discover and weigh the evidence. But the evidence he put before us was beyond my grasp.

I carried back to Greencroft a reference to the value of poetry and religion and his assertion that there is good science and bad science, and good and bad theology.  During that night I listened to Harry Belafonte’s instructive lyrics that were born of a slave’s hope, and visions of the beginning and the end. Here are a few: 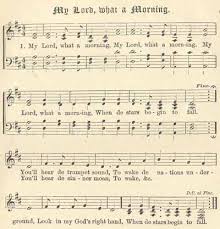 My Lord, what a morning
When the stars begin to fall.

Songs such as these gave me comfort during the night as I recovered from pneumonia.  Yet, I have caveats of my own. For anyone to claim to know the future with absolute certainty based on religious hope will likely prove to be bad theology.

I was born 92 years ago, the son of a Mennonite pastor and organic gardener in Franklin County, Pennsylvania. At age 10 I was baptized as a member of the Marion Mennonite Church. I own the "Old Fool" moniker because I want to walk the Jesus Way even though the world and much of the church takes me as a fool for doing so. In my life I have moved from being a young conservative to an elderly radical. I tell that story in My Faith Journey posted on my website.
View all posts by Martin Lehman →
This entry was posted in Biblical Interpretation, Church, Uncategorized. Bookmark the permalink.